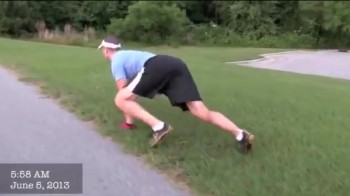 In the last few months I've had quite a few people ask me the same question about crawling for a mile: Why?

Did I lose you yet?

Sometimes we do things that other people will never understand. And we do these things simply to find out if we can do them; because we have to know. At first glance, It might be hard to understand why anyone would want to run a marathon, or something "crazy" like a 100K run. But many of those that embark on such feats of mental determination simply do it because they either want to know they can, or simply because they can. There is no logic. There are no trophies. There is simply a will and a desire to see how far they can go.

For all spectators, for all people who try to understand, there is only nonsense. For the doer, for the one who has to answer the question, "Can I?", there is a soothing, a knowing, that satisfies the soul.

Now think about this: Why would anyone want to try to stand for the first time ever, or try to take a first step towards a waiting mother with open arms?

Because they have a question inside that must be answered: "Can I?"

Some of us never grow up. Some of us never overanalyze whether or not something is worth doing. As children, curiosity begged us to move, explore and grow. Curiosity taught us we had no limits. Many of us forget this as adults. Many of us have mistakenly assumed the answer to the question. Many of us simply assume: "I can't." Or, "I wouldn't." But once upon a time, all of us, at some time, only knew "I can."

You can. Sometimes you just need to let curiosity call out to you and pull you along. Don't over think it, just answer the call. It is not logical. But it can be something we call Living.

Often the ones who point out the nonsense of others are the ones who only know how to exist. We were all made for so much more than simply existing.