That’s a question you may be asking yourself right now.

What’s the point to doing the resets every day - maybe even multiple times per day?

How powerful were the resets, really?

I used my bodyweight Pistol (single leg rock bottom squat) as the test. 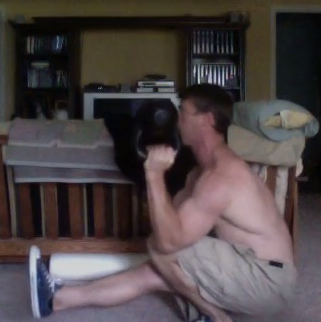 Double Bottom's Up Kettlebell Pistol Squat - Because I couldn't find a pic of the Bodyweight Pistol.[/caption]

Sure, I had been doing Pistols for 4 or so years previously, but I had struggled to do a TRUE Pistol. I always had to use a counterweight to make up for my lack of reflexive stability. (The counterweight stimulates your body to activate your deep abdominal musculature to stabilize your spine and pelvis so you can perform the exercise.)

Since I started doing the resets, especially the higher order crawls - Leopard and Spider-Man, I was starting to be able to get my Pistol. Not every day. Not always. But some of the time became most of the time.

When I added in backward crawling, the most of the time became all of the time.

When I took out the crawling, especially the backward crawling, I started to lose the Pistol. Sure, I could still do it with counterweight, but I could before, so that wasn’t the point.

The point was, I lost my ability to routinely and effortlessly do my bodyweight Pistol.

Not something I easily do.

I decided to stop fooling around and embrace the daily, sometimes multiple times per day reset.

A couple of interesting things physically happened once I did.

I was able to do things I’d never been able to do before - and I didn’t have to practice to do them. Things like: The One Arm One Leg Push Up and Muscle Ups.

Then the best part of all happened:

I could actually do ALL the things I wanted to do - some of which I couldn’t do for fear (based on past experiences) of significant injury.

All from “just” doing daily resets.

Not much. Just a little bit - maybe 10 minutes a day. 20 minutes on “big” days when I made the resets my actual workouts.

In essence, I restored my broken body and got the life back that I had lost - one I had spent the better part of a decade trying to find/regain.

So what’s the point to resetting daily?

The point is simply that you can physically restore the life you lost.

And even gain the one you’ve always wanted.