The Secret of the Octopus 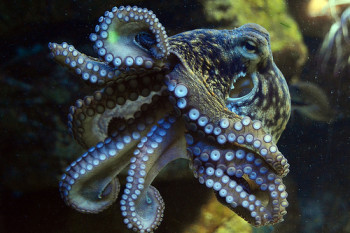 When I was in Monterey, CA, I had the chance to visit the Monterey Bay Aquarium. Inside the aquarium, I saw many wonders, many jewels of life and fantasy, swimming and being the way they were created to be. There is so much beauty to be found in the creatures of the ocean. Well, truly, thats a true statement for all creatures everywhere, but inside the aquarium I was struck with a sense of awe at how amazing this world really is and how wonderfully all life has been designed.

All the animals stood out. I could write about each of them and I'm sure I could find a lesson from each one of them. But today, I want to share with you what I learned from the octopus. I found out, and I did not know this, that the octopus is one of the most intelligent animals that man knows about. Apparently, the octopus is brilliant, smart, cunning, and creative. They are like giant brains with tentacles. They almost seem like Batman; they lurk in the shadows, they hunt at night, they camouflage themselves, and they leave a smoke screen (ink screen) to escape from would-be captors. The octopus is simply a fascinating animal.

It lives a seemingly sad life, but yet it is "alive." Take a real good look at its life. It is a solitary animal, an animal without companionship. It lives alone, in a hole. It is also an animal of deception. It changes its color to either hide, or hunt. Sometimes it changes its color to bluff and intimidate, or to show emotion. And, sometimes it shoots out ink to blind and disorient predators.

One of the joys of life for all life is that we all live, or that we all "be", the way we were made to be. We have to be what we were created to be. So here is the real point of all of this: We were not made to be an octopus, but many of try to live the life of an octopus.

Many of us isolate ourselves. We live in darkness. We hide our "true colors" out of fear of what others may think about us. We bluff, we lie, we fake emotion, and we throw up distractions to allow for an escape. Others of us actually end up resembling an octopus: one big brain with a soft body of tentacles created by a life of dormancy and isolation. We are intelligent, like the octopus, but we don't share the same joy of the octopus, only the same life.

Think about your life. How do you spend your days? Do you hide behind the veil of saying, "i'm an introvert."? Do you lounge at home and avoid conversations? Are the only "real" conversations you have about Duck Dynasty, Game of Thrones, The Walking Dead, or The Vikings?

We were not meant to imitate the life of an octopus: to lurk in the shadows, to hide in cubicles, to hide behind social media, or to drown in depression. We were made for a life of movement, conversation, and community. We were created for a life of shared laughter and shared experiences. And much like the octopus, we will never truly be "alive" until we decide to "be" the way we were created to "be." The octopus was made for a life of isolation and deception. We were not. We cannot live like an octopus and expect to truly live. In other words, we were not made to live a life of loneliness, lies and fear. We were not meant to live a life in darkness.

To be, to live, and to experience life, we need to have genuine experiences, genuine conversations, genuine relationships and genuine adventures. In other words, we need to "be" the way we were created to be. This is fundamental to having, maintaining and restoring our Original Strength.