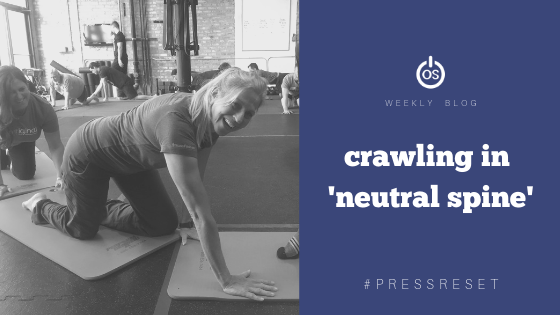 Why don't you guys crawl with your head in neutral spine?

Why don't you teach neutral spine?

These are just a few questions we sometimes get about neutral spine so I thought maybe it's time I discuss it or share my thoughts about it. Before I get into this though, let me just say I'm only sharing from my lens and how I see movement. I am not attacking any school of thought or form of practice. I'm only sharing my thoughts...

What is neutral spine?

Or, is neutral spine reflexive? Is it something that we once did, that we should do, that we have forgotten how to do?

In OS, we don't teach neutral spine because cognitively holding the head in line with the spine is not natural. We each have a righting reflex in our body and that reflex has a job: Keep the head level with the horizon. And, reflexively, by design, the entire body follows the head. Every muscle in your body knows how to fire, or is told how to fire, based on where your head is and where it is going.

If your head goes into extension, your muscles fire to help your body extend. If your head flexes down, your muscles respond to allow your body to go into flexion. If you look and rotate your head to the right, you facilitate right rotation. Now, to be sure, if we are really neurologically strong, we can easily disassociate and look right but rotate the body left, or look down but try to extend the body. We CAN do that, but it is not as powerful as it would be if the body were following its driver, the head.

Holding the head in neutral spine when the body is trying to flex or extend, like at the hips for instance, is like trying to get the head to follow the body. It can follow the body, but that is not the design and it doesn't take advantage of the natural, reflexive responses of the body. This can result in weaker, slower, less powerful movements. Basically, keeping the head in neutral spine is not athletic. It is cognitive and mechanical.

But let me be very open, I want to live in the "movement world" and not the "exercise world."

In the exercise and strength training world, neutral spine is taught to protect the spine when the body is under load. This may have its place if the body is not tied together well and it isn't neurologically strong. But if that's the case, I'm not sure the body needs to be under load performing exercises in the quest to become stronger. If the body had a solid reflexive foundation, would it need to be "protected" by holding the head and neck inline with the rest of the spine? That's almost like not being able to perform a beautiful bodyweight squat but going to the gym and trying to get stronger by performing heavy barbell squats. Anyway, that's a rabbit hole...

BUT, in the movement world, I would ask you to reconsider your view of neutral spine. If there is an issue with neutral spine I think it is the misapplication or interpretation of using it everywhere. Neutral spine is being applied to natural movements, like crawling. I think this is where it goes too far.

Ok, this gets tricky and I'll try to explain. Exercise is movement. But exercise is often movement inspired and created around tools like barbells, dumbbells, and/or machines. These movements are often designed to use the tools and they are not necessarily natural movements that you would perform out in the real world (think Olympic snatch). Not being natural movements, these movements often require a certain amount of skill development and come with a set of rules.

Natural movements, the kind your body just knows how to make that require no skill and no rules can be used to "exercise" or to get in shape also. And this is where the confusion comes in. Because natural movements can be used to exercise, an exercise lens is often applied to them. This results in people crawling or being taught to crawl with their heads held in neutral spine. But crawling isn't an exercise. It's a movement, and more specifically, it's a gait pattern. Can you guess when your head should naturally be on the horizon following the drive of the righting reflex? It's during gait...

No animal goes from point A to point B with a dowel rod on the back of its head and spine. Their heads are up on the horizon so they can see where they are going and so they can be athletic, mobile and powerful.

My point is, crawling with the head held in neutral spine simply isn't natural and it doesn't optimally take advantage of the body's reflexive design. It is still good, it's just not best. So it's okay to crawl with your head down, or inline with your spine if you want to. It's okay to do it if you physically can't hold it up. It's okay to move where and how you want to move. But if you are holding your head in line with your spine while you crawl because you think you are supposed to or because you are trying to protect yourself from the hazards of exercise I would ask you to reconsider how amazingly well designed you are and remember how resilient you are.

When you were one year old, you likely crawled all over your house with your head held up on the horizon. Relative to your body, your head was the size of a watermelon and it sat on top of your little pencil sized neck. Today, your head is about the size of a peanut compared to how big your body is and your neck is much bigger and better able to support your head. Or at least it should be.

Really, I'm not sure if neutral spine should even be a conversation. I think the true conversation is about reflexive posture. That conversation begins and ends with our movement design. We are designed to move in certain ways. Our strength potential is largely untapped because we don't engage in our design mandate: move.

Move to be strong and athletic. Move to have beautiful fluid posture. If we all moved as we should I'm not sure anyone would even care about having a neutral spine, or exercise for that matter.

Again, I'm just sharing how I look at movement. I'm not saying you shouldn't practice neutral spine in the weight room. I'm only asking if you should.