And now a guest article by OS Instructor and Friend, Aleks "The Hebrew Hammer" Salkin...

Ain’t no two ways about it, friend: over the past few years, there’s been a huge surge in interest in getting back to our ‘movement roots’.

Gone are the days when people’s only conception of fitness was what could be done with the equipment within the four sterile walls of their local fern-and-chrome colored mirrored paradise (aka the gym).  Slowly but surely people have gotten wise to the fact that they can get fit anytime and anywhere – no expensive equipment needed.

Beyond that, even top athletes have sat up and taken notice at the advantage to be had by harnessing the power of the natural movements they are heir to.

The most famous example of this is former UFC champ and mixed martial arts phenom Conor McGregor, who hired world-famous Israeli movement maestro Ido Portal as his movement coach to give him an edge in the Octagon. 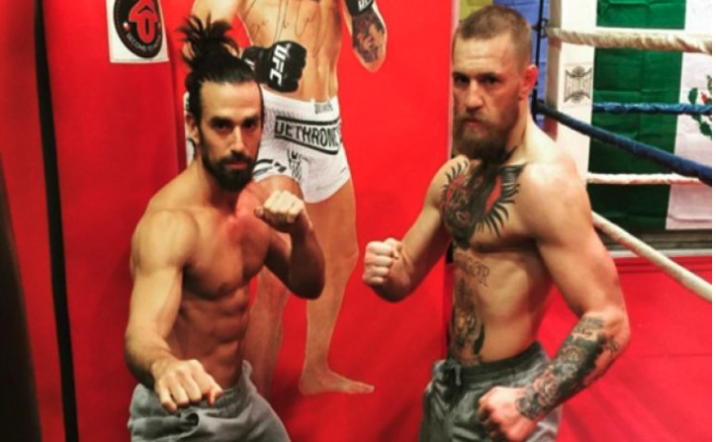 This same sense of awe and wonder at what the human body is capable of if you just, you know, move it the way it was made to move, draws more and more people to Original Strength every year for the same reason.

The ability to quickly, simply, and effectively tap into your body’s authentic operating system and unlock all sorts of abilities you never thought you had – from the ability to touch your toes or sit in a resting squat with ease all the way to running faster, playing harder, and lifting heavier than ever before – is downright addictive!

There’s a problem, however.

Most of us have been conditioned one way or the other to reduce our training down to the fewest possible moving parts in a misguided effort to keep things “minimalist”.

While the sentiment is a good one, the execution usually leaves a lot to be desired – particularly when it comes to Original Strength.

Case in point: given a chance, most OS newbies would love to crawl only and do nothing more. And you know what?  It will work!

For a little while, anyway.

Eventually, however, your training gaps will catch up to you, and you’ll be treading water and struggling to make progress just like before.

If you want to get stronger, move better, and make your kids and grandkids look like straight-up fools as they struggle to keep up with you and your boundless athleticism and ever-increasing strength, then you’ve got to pay homage to ALL the OS resets.

And while articles – nay, entire BOOKS – could be written on each of them, I want to spend a little time showering some much-deserved love on the oft-overlooked but mighty powerful rolling pattern.

For as much attention as crawling gets (and rightfully so) for its role in strengthening and solidifying your gait pattern, rolling is actually the movement that lays the earliest foundations of your gait pattern!

Rolling has a veritable truckload of benefits, including:

And though this isn’t an infomercial, I’d be remiss if I didn’t say this…

Rolling has another huge benefit that most people completely ignore, overlook, or don’t (yet) know about: skin stimulation.

Your skin is your largest sensory organ and is constantly feeding your brain information – on the safety/danger of your environment, the temperature, etc. – and uses 640,000 sensory receptors to send signals to your spinal cord via 500,000 neural pathways.

But most importantly of all, your skin needs to be stimulated in order to maintain proper physical and even mental health!

Tactile stimulation of the skin helps to establish more neural connections in your body, allowing you to move and develop more efficiently.  A lack of this stimulation has dire consequences.

For example, children who don’t receive loving touch from a caregiver can end up developing the same symptoms you’d see if they were malnourished: poor coordination, a weak immune system, lack of bone growth, and more.

Even as adults skin stimulation is important, as it plays a large role in hormonal balance by supporting the pituitary gland, which controls and regulates the other glands of the body while also producing somatotropin – or as it’s known more colloquially…

In short, small movements have a big impact, and if you’re not actively training your rolling, you’re missing out big time.

But I get it.  You’ve spent lots of your time doing other fun and flashy OS resets like crawling and don’t know too many rolling variations to keep your interest.

That’s okay – I got your back.

Here are 3 rolling variations you’ve (probably) NEVER done that will not only catch your interest but will break the chains holding back your strength and athletic progress in short order – so you can start knocking over old Personal Records as though they were statues of a deposed 3rd world dictator.

A personal favorite of mine, the frog roll fires up muscles you never even knew you had.

A souped-up transition from the TV watching head-nod position to sitting, the frog roll revs up muscles in the back, the obliques, the hips, the abs, and more, and it’s a great coordination drill to boot.

Perhaps the coolest of all?

It can have a real, almost instantaneous impact on your strength training as well.

Case in point: a colleague of mine, Alyssa DiNatale, started doing these after I showed them to her and noted that they had a big impact on her deadlift strength.

I can already see you chomping at the bit to try this elusive, exclusive roll, and I don’t blame you.  Here’s how to do it.

Unlike other rolling variations which involve some level of increasing spinal rotation, the only spinal rotation in the hard roll is in the neck – and that means you have to have above-average head control to make this work.

If this bad boy is too tough, give the ‘soft roll’ a try:

Last but not least, we arrive at the elevated roll – one of my personal favorites.

The elevated roll has you beginning in a peculiar position for OS: in the pushup plank.  From here, you’ll want to do the following:

The great thing about elevated rolls is how much muscle they ignite – particularly in the upper back, the sides of the hips, the shoulders, the triceps, and even the hamstrings!

These are a personal favorite of mine to do between sets of pullups.  I just do 2 per side and the back activation (or “back-tivation” as I like to call it, lol) helps me get my chin over the bar every time.

So there you have it! 3 must-try rolling variations to spice up your training, reignite your long-lost progress, and radically improve your movability while unshackling your body to make huge leaps in your strength and athleticism.

Set aside a paltry 3 minutes per day – 1 for each roll – and put them to the test.

If you fall in love with them, just be sure to invite me to the wedding.

He is the author of The 8-Week Kettlebell & Bodyweight Challenge, and has a popular daily email list where he dishes out his best tips, tactics, techniques, and strategies for getting stronger, fitter, and healthier with kettlebells, calisthenics, and Original Strength.  To join (and get a free copy of the 8 Week Kettlebell & Bodyweight Challenge) click here => https://alekssalkin.leadpages.co/8weekchallenge/