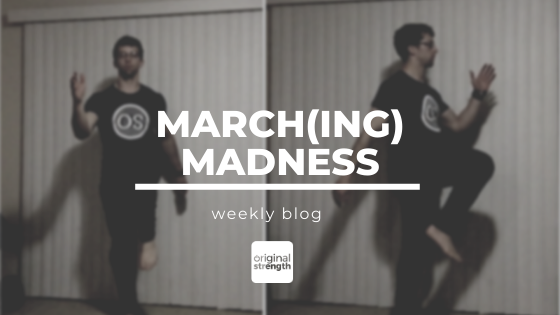 “A Roman soldier, who spent most of his adult life in the army, was able to endure intense physical stress for long periods of time, especially during army campaigns. An infantryman had to carry 40-60 pounds of equipment on his back, march thirty miles, toil, build camps or fight – almost every day.”

When the word “warrior” comes to mind, few other images can truly compare to that of the Roman soldier.

Their fearsome and legendary reputation as fighters who could take on opponents that far outweighed them – and win handily – spread not just across the ancient world, but across time. To this day the Roman army is still considered a marvel of military might.

Weekend Warrior – someone who engages in an activity only on the weekend.

Keyboard Warrior – someone who talks tough to strangers on the Internet behind the safety of their computer screen.

Doesn’t exactly evoke the same amount of pride, does it?

Well, have no fear, friend-o.  While the modern era and its abundance of easy living may have made a mockery of the once respectable word, you can recapture at least some of what made the Roman soldiers so seemingly invincible.

And don’t worry – you don’t even have to stab anybody (please don’t, actually).

You can reclaim a bit of that past Roman athletic glory with a simple, foundational movement – one that can be done daily, in fact.

I’m speaking of none other than, of course, marching.

As the quote above mentioned, marching made up a large part of the Roman soldier’s day – up to 30 miles of it, to be more precise.  And not only that, but they marched with between 40-60 lbs (18-27 kg) on their back.  Daily. For the majority of their adult lives.  I’m no expert, but I’m willing to bet that got them in pretty darn good shape.

And wouldn’t you know it – marching just so happens to be one of the fundamental movements we teach in Original Strength!

It’s not there because Roman soldiers did it so it must be cool. No no!

Marching is a crucial part of the Original Strength RESETS because we are quite literally made to do it.

While crawling typically (and understandably) takes all the glory when it comes to the Original Strength RESETS, it is marching that grabs the proverbial baton from crawling and launches our athleticism, strength, conditioning, and bulletproof resilience into the stratosphere.

Marching has loads of benefits, including:

• It picks up where crawling leaves off


While crawling lays the foundation of our gait (i.e. walking) pattern by teaching us to move contralaterally across the ground by using all four of our limbs, marching teaches us how to take that to the next level – by getting us to move with all fours while standing on two legs.

Take a look around and you’ll notice something curious: most people barely use their arms when they walk!  Imagine trying to do the same thing when you crawl.  Actually, better yet, give it a try.  Experience makes the best teacher.

Our shoulders are made to mirror our hips when we walk, and a part of this includes moving into extension (i.e. behind our body).  Crawling – for as great as it is – isn’t meant to handle this element of human movement, but walking and marching are.

Add this to your daily routine and watch as your stiff and achy shoulders suddenly feel loads freer and better.
• Coordinates the hips and shoulders in real-time

It’s one thing to ‘rediscover’ your hips and shoulders through rolling, rocking, and crawling.  It’s a whole nother thing when you learn how to put it all together and do it in real-time – especially on your feet.

Not only does this help you restore you to move the way you were made to move, but it also lays the foundation for one of the highest-level athletic movements humans can do: sprinting.

If you’re past the age of 40 and have been “out of the game” for a while, going right into sprinting is not a wise idea.  Getting reacquainted with marching, however, can not only work wonders at getting back the athleticism you were made to have but can also set the stage for safely reacquiring the sprinting you were able to do ages ago.
• It strengthens the feet, ankles, and entire lower leg

“Take care of your feet and your feet will take care of you” is a common hiker’s saying.  Just like anything else in the body, the joints and muscles of the lower body need an adequate amount of good stress in order to adapt and stay healthy and strong.  While running may be a step too far right out of the gate, marching is just what the proverbial doctor ordered for naturally and effectively strengthening and conditioning your calves, ankles, feet, and everything surrounding them.
• Gently mobilizes the spine.

The Chinese have a saying: “You are as old as your spine”.  Without question one of the most important functions of the spine is to twist – and far too little of that is done in gyms and weight rooms around the world, given that twisting your spine under load can lead to disaster.

The good news is that marching helps to fill that ever-present and all-too-common gap, and will get your heart and lungs pumping, too.
• Helps you maintain your balance as you age

There is a direct correlation between a loss of balance and brain deterioration in older adults.  In fact, super coach Dan John has made this one of his #1 priorities in screening new students – if they can’t stand on one leg for 10 seconds, he refers them to a neurologist.

Life happens one leg at a time, and the better prepared for that you are, the better you’ll be able to tackle it, pin it to the ground, and make it bend to your will.

Best of all, marching – like everything we do at Original Strength – is mercifully simple.

1) Stand nice and tall, with your eyes forward and your chest up.
2) Lift your right arm and left leg upward, while simultaneously swinging your left arm behind you.
3) Quickly and smoothly switch sides.

Do this for 1-2 minutes without taking a break and watch what happens.  Don’t be surprised as your heart beats a notch or two faster, your lungs start pumping a little harder, a bead of sweat forms on your brow, and your entire body feels invigorated.

You don’t have to do this for 30 miles a day, but I’m willing to bet that if you found even just 30 seconds per day to do this a lot of really cool stuff would start happening to the strength in your legs, glutes, core, and beyond while making those stuck shoulders and stiff spine of yours feel a little more lively.

Don’t take my word for it.  Give it a shot and watch the physical transformation as you unleash your inner warrior.

He is the author of The 8-Week Kettlebell & Bodyweight Challenge and has a popular daily email list where he dishes out his best tips, tactics, techniques, and strategies for getting stronger, fitter, and healthier with kettlebells, calisthenics, and Original Strength.  To join (and get a free copy of the 8 Week Kettlebell & Bodyweight Challenge) click here => https://alekssalkin.leadpages.co/8weekchallenge/