How to Improve Your Press 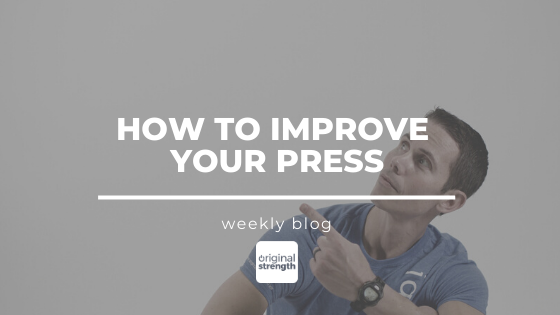 Fairly often, I get questions about how one might improve their press, or squat, or whatever.

There are a number of ways you can improve your lifts, the most obvious way being practice your lifts. But if you are one who has spent any time chasing strength, you may know all too well that practice doesn’t always make something better; better being your measurement of outcome, not the efficiency of the practice.

What I mean is practice is repetition and repetition makes an efficient nervous system; in the way you are using it. It can be argued or politely discussed that practice always makes better if we are measuring the efficiency of the nervous system. But an efficient nervous system may yield different results than the intended desired outcome of the practice. For example, if you continue to practice your press but your technique is “off” you are making the “off” pattern efficient and you are not necessarily going to safely increase the amount of weight you can actually press. Heck, if you practice too much, you could go the opposite way and end up being able to press less due to overtraining or injury.

So, proper technique, sound progressive loading principles using magic sets and rep schemes, combined with adequate recovery and proper nutrition are a sound way to improving your press (or the lift of your desire). This may take much discipline and patience, but it can work.

But let’s imagine you’re already invested in doing all the “right things” but you have a goal just barely out of your reach, yet you just can’t quite touch it.Then what?

Your body is FULL of amazing strength potential and it is there waiting for you to express it. But it will be governed and limited if your nervous system is not as safe and strong as it needs to be. These limits can easily be removed and your strength can more fully be expressed and realized by simply returning to the most basic movement patterns and getting ridiculously good at them.

If you can perform the simplest movements extraordinarily well, you will unlock your strength potential and you’ll see amazing gains in your lifts (or whatever else you might be chasing after).

Take crawling for example. Yes, I know, we’ve discussed this so much already, but it cannot be over addressed. Crawling is such a simple movement with far greater benefit than you can imagine, but you don’t have to do it - I’m just using it as an example.

Getting ridiculously good at crawling, with fluidity, absolute control, rhythm, ease and grace will take the breaks off your nervous system. It ties everything together and will ultimately allow you to experience a new level of strength expression you’ve never experienced. It’s a simple way to unlock your body’s potential, but that’s pretty much the purpose of crawling in the first place.

Anyway, you could even quit practicing your desired lift for a season, focus on crawling and return to your desired lift stronger than ever. I know that sounds crazy, but I can’t tell you how many times I’ve heard the same story over and over. Here is a letter I just received today from a friend:

“I have not touched kettlebells or weights since I started doing OS seriously in Jan. Actually, I did some carries. But not since May, I think. I never could come close to pressing a 24kg bell for many reasons. But yesterday I noticed there were cobwebs on the bells and I have come far with all the strengthening resets. So, long story short I pressed a 24kg with each arm. It was the best pressing groove I ever had and it didn't even come up that slowly even though it wasn't easy. It's a big improvement and is a testament to the universal application of resets and our design.”

He didn’t touch his bells or practice his press since January. It’s October. That’s nine months. That’s amazing. Or is it? What if we were all just so good at the simple things we became great at expressing ourselves in all the ways we desired to. Whether a press, a squat, a dance move, a poem, a marketing pitch, or just a conversation. What if we were so well connected because our original operating system was fully functioning that we had no limits or tethers to hold us back?

Want to improve your press? Make sure you can crawl really well, or roll like an ocean wave, or breathe like a newborn babe. Get really good and comfortable performing the simple movements that hold up all other movements. Express your full potential.