How to Teach the Single Leg Deadlift the OS Way 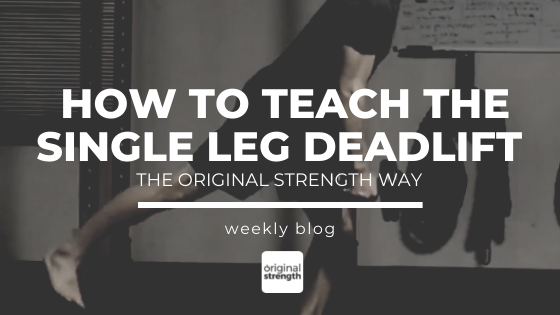 There’s no question about it: the Original Strength resets are a fantastic way to reinvigorate the body and free up its ability to move as it was made to.  To move with ease, grace, power, through the natural, in-born reflexive stability which we are all heir to (for those new to Original Strength, reflexive stability is your body’s ability to anticipate and react to movement before it happens – made possible by the nervous system via proper stimulation of the vestibular (balance) system, which the OS resets and later higher-level movements help to facilitate). Whether used as a warm up before your workout or a cool down after, OS will take you from degeneration to regeneration every step of the way.

But in my humble opinion, once you’ve become familiar with the basic OS resets and have employed them for a time in your own training, where Original Strength REALLY shines is in its ability to be used as a method of shortening the learning curve for other movements – particularly strength-based movements.

This is true for a myriad of different movements, but in this case, I’m talking of none-other than the single-leg deadlift.

Yeah, yeah, I know what you’re probably thinking. “The single-leg deadlift is hardly a strength move; it’s a show of balance and coordination more than anything.” True, but there’s still a good amount of strength to be gained from it, particularly in ensuring that your strength development is balanced on both sides of your body. Besides, I don’t know of too many strength movements that aren’t improved by better coordination and balance, be it on one foot OR in terms of balanced strength and development overall. And if you’re looking to hammer out imbalances, build single leg strength, stability, and coordination, the SLDL is like a Samuel Adams beer: always a good decision. Beyond all that, when done properly, it is itself a higher-order reset in the same vein as sprinting and the loaded resets!

How? Take a look: 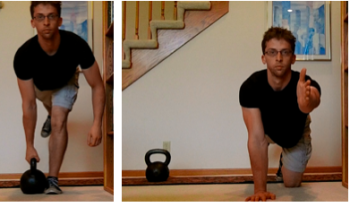 1) Breathe with the diaphragm.

NOW compare the two above pictures and consider the efficacy of the single leg deadlift as a potential reset for those who are prepared for it. It will definitely do the latter two, and diaphragmatic breathing can easily be added to the mix. So how do we properly prepare ourselves – or our students - for this movement if we’re not familiar with it?

I think it goes without saying that first and foremost, you must have a solid foundation built off the OS resets as well as the ability to deadlift on two legs.

If you can’t understand why this would be important, please stop reading this article, turn your computer off, and hit your head against the wall a few times. Once you’ve done that, here’s the surprise method that I’ve found radically shortens the learning curve, the amount of cueing, and the wailing and gnashing of teeth that sometimes comes with learning this move.

A reset that you’ve probably never done, but will find has some incredible power as a side-kick movement to all manner of higher level strength moves (stay tuned for a future article on how I used it to help me consistently nail an elusive bodyweight strength feat).

Why does it work?

For a couple of reasons:

1) It requires you to balance on a single leg

2) It helps train and strengthen the extension diagonals of your cross-lateral X design (as opposed to the dead bug, for example, which trains cross lateral flexion). This is important to have nailed down for a strong, stable single-leg deadlift.

3) As performed in OS, bird dogs always add a knee tap in the middle to engage the flexion diagonals of this cross lateral extension movement – equally necessary in a single-leg deadlift as we are not only relying on our back, grip, and single-leg strength, but our ab strength as well.

4) Interestingly, in addition to all the OS-focused benefits of using this to teach the single-leg deadlift, it also helps in a somewhat unexpected way; it makes it easy to teach the student how to actively push their “non-working leg” (a misnomer if I’ve ever heard one, as in reality it is doing anything *but* resting) backward to act as a rudder and improve balance in the single leg deadlift. For those of you who have ever done it, you know how important this is to keep you from toppling end over end and slamming head first into a wall (something you may have done anyway if you took my advice earlier in the article). And for those of you who have coached the single-leg deadlift, you know how hard this can be to teach – and make stick – among students learning the move for the first time.

By why rock? Why not just do the bird dog?

The reason is simple. First, look at the hip angle between the SLDL and the bird dog rock.

They’re pretty darn close. Moreover, oftentimes even if a student has properly nailed the position itself, there still remains the ability to maintain this position while moving – another characteristic that the bird dog rock masterfully instills upon trainees.

So, how should you use one to train the other?

From my perspective, the best route is to do a set of bird dog rocks between each and every set of single leg deadlifts. Or every other set. Or every few sets. Whatever you need, really. Keep the rep count low initially (particularly if the student is just learning them) and feel free to raise it as high as you’d like as time goes on.

Eventually you can even move as high as this:

The ease with which you’ll be able to perform SLDLs will start to amaze you. High rep sets with no loss to your balance – in fact, quite the opposite – will become the norm and you may even find that hip, knee, and ankle issues that have started to rear their nasty little heads may start to resolve themselves one by one. Sounds too good to be true, but some of the best things in life are.

Remember, the resets can set you free.

And the resets don’t stop with the Big Five (diaphragmatic breathing, head control, rolling, rocking, and crawling). These will always do the trick, but your development didn’t stop there and your training shouldn’t either.

Reclaim your high-level skill and abilities and start exploring – and exploiting – the movements that will further tie your X together.  Learn to use the Original Strength lens that is taught within the OS Pressing RESET and Pro RESET Certifications.

If you’re willing to see how deep the rabbit hole goes, becoming bulletproof truly is no myth. Play with these today and see what this combo can do for your strength, athleticism, and overall movement quality.

Aleks Salkin is a level 2 StrongFirst-certified kettlebell instructor (SFG II), StrongFirst-certified bodyweight Instructor (SFB), and an Original Strength Certified Coach. He grew up scrawny, unathletic, weak, and goofy, until he was exposed to kettlebells and the teachings and methodology of Pavel in his early 20s. He is currently based out of Jerusalem, Israel and spends his time teaching clients both in person and online as well as spreading the word of StrongFirst and calisthenics. He regularly writes about strength and health both on his website and as a guest author on other websites. Find him on Facebook at https://www.facebook.com/alekssalkintraining and online at https://www.alekssalkin.com.

**This article was first published in 2015 but we wanted to bring it back to you again now.